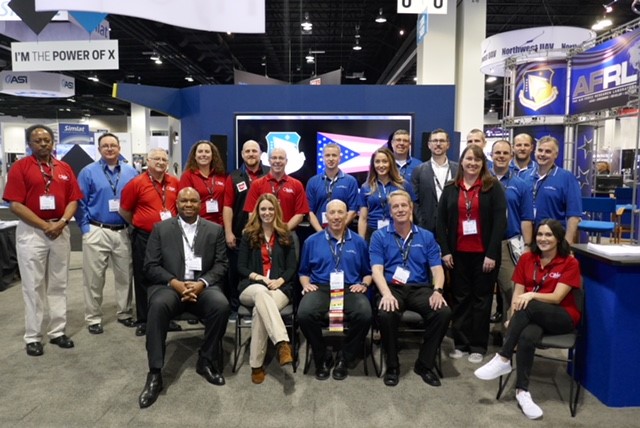 A team of Ohio’s Unmanned Aerial Systems experts, including SelectTech Geospatial’s Director, Frank Beafore,  recently traveled to XPONENTIAL 2018 in Denver, CO to share why the Buckeye State’s UAS industry continues to grow and thrive. The global conference organized by the Association for Unmanned Vehicle Systems International (AUVSI) marks one of the industry’s leading annual gatherings, featuring more than 600 companies in 20 UAS-related industries. 8,000 industry professionals from 55 countries attended the three-day event. This year, the Ohio team partnered with the U.S. Air Force Research Laboratory (AFRL) to focus on the growing partnership between Ohio and AFRL in Springfield, OH.  The State of Ohio and AFRL announced plans to invest a total of $5M in a Ground Based Sense and Avoid system at Springfield-Beckley Airport for Beyond Line of Sight (BLOS) research. Once the system is up and running later this year, it will allow AFRL to use more than 200 nm2 of unrestricted airspace for UAS BLOS flight.  In addition to SelectTech, Ohio’s XPONENTIAL delegation included the Dayton Development Corporation’s aerospace and aviation team, JobsOhio, the Ohio/Indiana UAS Center, Clark State Community College, and Springfield-Beckley Airport. These experts showcased Ohio’s strengths and leadership in UAS research and development, materials and manufacturing, training and education, and applied capabilities.  According to an economic study by AUVSI, the UAS industry will see considerable growth over the next several years, and by 2025, it’s projected that UAS integration will create more than 100,000 jobs, and have an economic impact upwards of $82B.  The State of Ohio has unmatched resources, capabilities and opportunities for the UAS community, including UAS training, manufacturing, world-class R&D, systems integration, data analytics, and operational ranges.  SelectTech is proud of our role in showing the world why they should “Fly Ohio!”